If you visit the website of Polish-born, Düsseldorf-residing photographer Josef Schulz and click on “bio,” you will find nothing about his life, work or aesthetic guidelines, only a list of his exhibitions. Even on his own page, the man seems as enigmatic and unrevealing as much of his photography.

Anyone seeking to understand Schulz’s visual influences must know that he studied at the Düsseldorf Art Academy under the husband-and-wife team of Bernd and Hilla Becher, whose pioneering studies of water towers, coal tipples, gas works and other industrial structures, known as “typologies,” not only created a rich photographic corpus, but also inspired a veritable school of younger artists whose photography documents the most mundane objects of the industrial age.

Thomas Ruff, another of Schulz’s teachers in Düsseldorf, was a pioneer in contemporary German color photography, and his influences included American color photographers of the quotidian such as Joel Meyerowitz and Stephen Shore.

For centuries, the geographic borders of Schulz’s homeland have not only been porous, but have also shifted like the tides as larger contending armies of the East and the West fought for hegemony over Poland. It was only with the collapse of the East Bloc and the Soviet Union that Poland was able to resume its position as a crucial and unfettered link in the mainstream culture of Europe.

Today, as Brexit and newly resurgent nationalist and nativist movements all over Europe flex their revisionist muscles (and France and Germany contend with their own populist/isolationist political parties in upcoming elections), a series of Schulz’s photographs from the first decade of this century bears vivid but quiet witness to a past that was defined for centuries by borders, tariffs and distrust —low-hanging fruits of endless and often fratricidal wars.

One of the glories of the European Union and the free flow of goods and people it fostered across the continent was the breaking down of national prejudices and cultural isolation, which historically fueled a kind of hysteria about racial and ethnic purity in many European countries. Once thought to be a dead relic of the Cold War, this hysteria seems to have been reborn in Russian revanchism and its cousin, the fear of Muslim refugees. There is no simpler symbol of how the E.U. dissolved economic and social borders than Schulz’s photographs of abandoned border checkpoints. The question for us today is whether these sites will become the locus for new walls.

In these stark images of once heavily trafficked ports of call, Schulz used digital tools to isolate the backgrounds outside the perimeters of the buildings.

A nimbus of overexposure simulating an aerial haze or fog makes the buildings look like scale models or even child-like coloring-book sketches.

It’s not even a far reach to think of the paper-cutout models and site-specific re-creations of Thomas Demand:

Once Schulz explored simple digital manipulation with his border-station photographs, it was an easy step to create photos that had the architectural heft of real buildings but were, in fact, carefully constructed composites of elements from multiple sources. This newer work is totally deracinated, devoid of any suggestion of national or cultural origin. Schulz calls the series “Forms.” The images are either untitled or simply named for the dominant colors of their constituent elements.

Schulz’s website includes a brief explanation of the process by which he constructs “Forms,” but it was written by Ruff:

Josef Schulz does not aim at exposing this architecture in any way, nor does he want to venture into a critical analysis of its appearance. He simply uses the photographs of the buildings to study the grammar of his trade. Schulz starts by taking traditional photographs of the halls, storage facilities and industrial structures with large-sized photographic plates. Using digital image processing, the analogue picture produced is then “cleansed” of the few remaining hints pointing to age, location or environment of the buildings. All details that might possibly allow conclusions concerning the actual size, users, time or place of the buildings are completely removed.

Like many of his contemporaries, Schulz employs both analog and digital techniques, capturing the elements on large-format film negative, scanning onto digital files, and then meticulously constructing the finished photograph.

It does not seem so long ago that there were impassioned debates about the analog/digital divide, a debate put to rest by the reality that both photochemical and electronic image creation are merely paths artists choose. As always, what is valued by the artist is the expansion of older techniques, as well as the creation of newer ones to give us aesthetic “delight.” 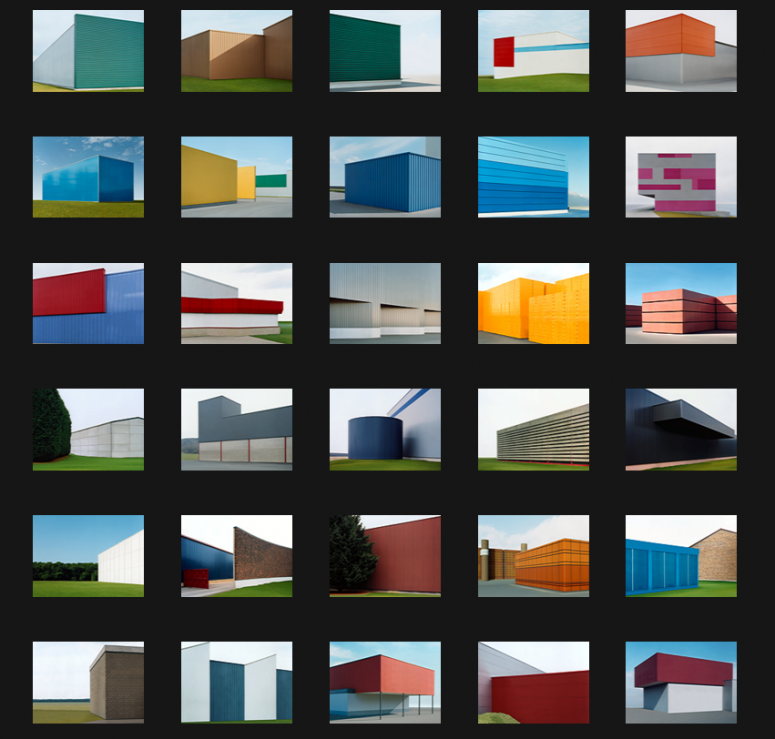